A.what he did and

A.what she had done with the newspapers

B.what the matter is with the little girl

C.which gate I should go

D.when we should meet at the school gate

8.The Smith are considering______to England because they_____the cold weather there.

D. not to move, aren’t used to

13.I spend much more time playing basketball than I_______for my lessons.

Most parents, I suppose, have had the experience of reading a bedtime story__1__ their children. And they must have realized how difficult it is to write a good children’s book. Either the author has aimed too _2_ , so that the children can’t follow what is in his (or more often, her) story, _3_ the story seems to be talking to the readers.

The best children’s books are _4_ very difficult nor very simple, and satisfy both the child who hears the story and the adult who read it. Unfortunately, there are in fact few books like this, _5_ the problem of finding the right bedtime story is not _6_ to solve.

This may be why many of the books regarded as woks of children’s literature were in fact written for _7_ . “Alice in wonderland” is perhaps the most obvious of this.

Children, left for themselves, often_8_ the worst possible interest in literature. Just leave a child in a bookshop or a library and he will more willingly choose the books written in an imaginative way, or have a look at most children’s comics(连环画), full of the stories and jokes which are the objections of teachers and right-thinking parents.

Perhaps we parents should stop _9_ to brainwash children into accepting our taste in literature. After all children and adults are so _10_ that we parents should not expect that they will enjoy the same books. So I suppose we’ll just have to compromise（妥协） over the bedtime story.

Over 1,400 university students from 37 countries and regions came to China for the 2006 s World MUN meeting (世界大学生模拟联合国大会). The meeting was held in Peking University from March 27th to 31st, 2006.
The idea of the World MUN began in 1991. A group of students at Harvard (哈佛) University wanted to make a new meeting to bring together the students who were interested in the world. They wanted to discuss different problems around the world. The World MUN is based on understanding, compromise, learning and friendship. The first meeting was held in Poland in 1992. After that, it is held in spring every year. Last year, it was held in Scotland.
This was the first time the World MUN meeting was held in Asia. It was also the biggest one in history. The students came from the best universities around the world. During the five-day meeting, they did everything that people in the UN do. Though their skin colors and cultures were different, they had the same wish to make the world better.

%1. Which of the following is NOT true?

A. The First World MUN Meeting

D. Problems Around the World

When someone says "Well, I guess I ll have to go to face the music", it does not mean he is planning to go to a concert. It is something far less pleasant, like being called in by your boss to explain why you did this or that, and why you did not do this or that. Sour music, indeed, but it has to be faced.

The phrase "to face the music" is familiar to every American, young and old. It is at least 100 years old. Where did the expression come from?

The first information comes from the American writer James Fenimore Cooper. He said -- in 1851-- that the expression was first used by actors while waiting in the wings to go on stage. After they got their cue to go on, they often said, "It s time to go to face the music." And that is exactly what they did face the orchestra(交响乐团) which was just below the stage.

An actor might be frightened or nervous as he moved on to the stage in front of the audience that might be friendly or perhaps unfriendly, especially if he forgot his lines. But he had to go out.

So, "to face the music" came to mean having to go through something, no matter how unpleasant the experience might be, because you knew you had no choice.

The other explanation comes from the army. Men had to face inspection(检阅) by their leader. The soldiers worried about how well they looked. Was their equipment(装备) clean---

shiny enough to pass inspection? Still, the men had to go out, and face the music of the band, as well as the inspection. What else could they do?

5. According to the passage, the word "music" means

A. your boss s criticism (批评)

B. your leader s inspection

C. something unpleasant to be experience

A. all the Americans

7. "To face the music" is also used to mean that soldiers were not willing _ _.

A. to be examined about their equipment

B. to be found weak

C. to show themselves up in public

D. to be inspected by their leader

A. the meaning of the phrase "to face the music"

B. how to deal with something unpleasant

C. the phrase "to face the music" in America

D. how to go through difficulty

We have known for a long time that flowers of different plants open and close at different time of day. This is so familiar that there seems to be no need to ask the reason for it. Yet no one really understands why flowers open and close like this at particular times. The process (过程) is not as simple as we might think, as recent experiments have shown. In one study, flowers were kept in constant (连续的) darkness. We might expect that the flowers, without any information about the time of day, did not open as they normally do. In fact, they continued to open at their usual time. This suggests that they have some mysterious (神秘的) way of knowing the time. Their sense of time does not depend on information from the outside world; it is, so to speak, inside them, a kind of "inner clock".
This discovery (发现) may not seem to be very important. However, it was later found that not just plants but also animals -including man -have this "inner clock" which controls the working of their bodies and influences (影响) their activities. Men, then, are also influenced by this mysterious power. Whether we wish it or not, it affects such things in our life as our need for sleep, our need for food.
In the past, this did not matter very much because people lived in natural condition. In the modern world, things are different; now there are spacemen, airplane pilots and, in ordinary life, a lot of people who have to work at night. It would be very useful, then, to know more about the "inner clock". Such ordinary things as flowers might help us understand more about ourselves.

A. different flowers open and close at different times of day
B. for their opening and closing, flowers do not need information from the outside world
C. flowers are influenced by weak light even when they are in a dark room
D. flowers can be used for telling the time

A. is an unimportant discovery

B. is only found in animals
C. has not been understood by far

D. has an effect on human life

%1. Further study of the "inner clock" will be useful because .

A. it might help us in some way
B. we do not yet understand plants and animals well enough

C. the number of spacemen and airplane pilots is fast increasing
D. we should try to live more naturally than we do now

C. will open as they do in natural conditions

%1. ______ have a mysterious power of knowing time without information from the outside world.

A.Animals including man as well as plants

C.Flowers are the only things in the world that

1．Since he was chosen to be the___(主角)role of the action film,he has never stopped practicing Chinese Kung Fu.

5.The book he that ordered the day before yesterday was______(取消) at last.

6.Grade 9 students put all their effort into studying in the_____(finally) two months.

7.These are______(act)costumes.They are made for those beautiful ladies

1.The newspaper says that the price of meat______(fall)a lot in the last few weeks.

8.How happy the students from different countries were_______(see)each other yesterday.

Whenever we meet with difficulty or failure (失败), teachers, parents or others often say to us "Never give up." These can be encouraging words. A person should believe in himself and keep trying to be successful no matter how many times he fails. Therefore, I believe that we should never give up. One reason is that if we give up too easily, we will seldom achieve anything. It is not unusual for us to fail in something new, so we should try again. Besides, if we always give up when we fail , we will not be able to develop new skills and grow.
Another reason is that we can learn from our mistakes so as not to do the same things again. If we do not try once more, the lesson we have learned is wasted. Finally, we should never give up because as we work to reach our goals, we develop confidence, and this confidence can help us succeed in other areas of our lives. If we never challenge(挑战) ourselves, we will begin to doubt our abilities.
In short, it is important that we do not give up when working for our goals. We succeed in the end or not, we will learn something , and what we learn will help us to become better and more confident. What s more, if we give up , we have no chance of realizing our dreams any more , but if we keep making great efforts, there is always a chance that we will be successful one day.


Topic: Never Give Up 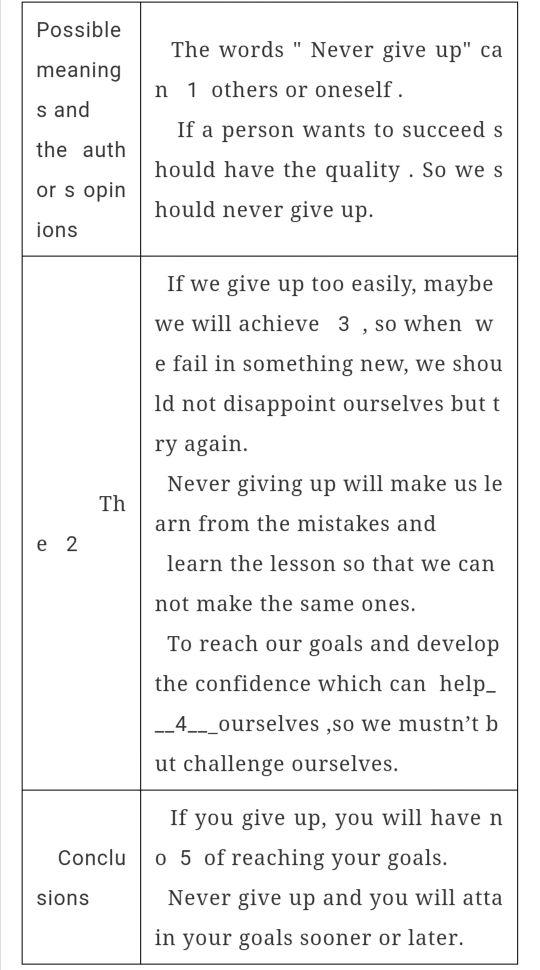 1. don’t think the film based upon the novel is suitable for teenagers

2. what the computer will be like in the future

3. brings the dinosaurs alive on screen

4. Wore a T-shirt to avoid being mistaken by others

5. if/whether there is a special offer before four o’clock every Wednesday

6. was considered as one of Hollywood’s all-time greatest actresses